skip to main | skip to sidebar

Why does a lefty always have to face a lefty? Due to the frequency of this, did it ever occur to some manager that you just might be doing that batter a favor? Heck, knowing the percentages, why wouldn't a lefty practice mostly against lefties?
The other side of this argument is on behalf of the pitcher. Here, you have a guy settling into a pretty good groove and you're going to let the opposing manager dictate how this particular game is to be played. Percentages certainly wouldn't allow me to lose faith in the pitcher just because the opposing manager makes a high percentage move.
Back to the batter, he has to be strong-willed and not tolerate this disbelief from anyone. Nobody is cutting into your confidence. It's not you who doesn't believe you can do it. Give yourself the best chance to succeed by being disciplined enough to only swing at strikes.

Start Planning for Next Year

After losing 3-1 in the 9th inning and 2-1 in the 8th, against last year's World Series champion Astros, tells me the Giants need to be planning for 2019.

Let's see how Chris Shaw hits big league pitching. If there is anyone who can pitch in the big leagues. Pan the minors to see if there are any nuggets.

Is Bruce Bochy coming back? Is the decision his? If so, I say he comes back for another season. He has some unfinished business due to all of this year's injuries.  The decision will likely be determined in how the team finishes the season. I don't think I will be surprised if the brass goes in another direction.

Throughout the game, while David B. Fleming was doing the play-by-play, he kept referring to the strike zone as, "he's been calling them that way, all game long." Yes, he had. And Magoo was all over the place in doing so.
How can we expect a batter to adjust to a strike zone that isn't a rulebook zone? Pitches were too low to swing at. Unhittable.

It has always been understood that the batters need to adjust to the umpire and not the other way around. But if the ball is too low, too high, too wide or too inside, YOU CANNOT MAKE ANY ADJUSTMENTS. The major leagues don't reprimand inconsistent umpires who struggle mightily with discerning a strike from a ball. These Magoos umpire home plate every fourth day despite their futile attempts to run a ball game. And it's unfortunate for the paying customer to witness this hazy focus at home plate. Baseball, by leaving these guys in there to miss calls, doesn't want the repeat customer. Businesses have longed for the repeat customer, baseball isn't one of them.

Samardzija has to Lower the HR totals

Jeff Samardzija had a great year if you like strikeouts versus walks. And who doesn't? But it is those at-bats when he gets ahead of the hitter that he gives up too much of the plate and the ball goes a long ways. Usually over the fence in fair territory.

Listening to Jon Miller you got the feeling he couldn't emphasize enough how Samardzija would get an 0-2 count on someone and then lay one in there. Come on, man! When you are ahead in the count you make the hitter hit something out of the strike zone. Anything in the strike zone is a gift.

The other pitchers on the Giants's staff gave up their fair share of home runs but it was usually because the home plate umpire had an intermittent strike zone and they had to put one in the strike zone for fear of walking the batter.

Now if only the Giants can figure out a way to get an umpire to be more consistent with calling balls and strikes.

Kryptonite for the 2017 San Francisco Giants

Home plate umpire, Doug Eddings, it was announced by David B. Fleming, is second among major league umpires in calling strikes. It led Dave to to speculate that this made Eddings a "pitcher's umpire."

Listening to the entire broadcast I have a few ideas of my own about Dougie behind the plate. This season, when you listen to a Giants' broadcast you can expect a lack of execution AND the occasional brain fart because it's what this collection of talent does more often than not.

In this game, on July 20, there were two incidents that immediately come to mind. One was Eduardo Nunez's stealing of third base only he could not control his slide with the "oven" mitt he wore on his hand for protection. This mitt has no fingers! So rather than having Noony on third base with one out there was nobody on base with two outs.

The second was when there was a runner on third base with less than two out and Brandon Belt at the plate. The Padres defense was playing back willing to concede a run in exchange for an out. This was genius by the San Diego manager (Green) because this type of opportunity is kryptonite for the 2017 San Francisco Giants. Belt would take a called third strike. The words of Duane Kuiper, 'Right down the middle.'

Back to Eddings. He may call the second most strikes in the majors but he has the kind of strike zone that doesn't favor anyone. Both the pitcher and the hitter have no idea what to expect. It is inconsistency at its worst when the umpire isn't even sure when the pitch is a strike. Are you kidding me? The sudden arm pump, convulsion if you will, (by Eddings) as if he were in the middle of an epileptic seizure, is why it appears he himself doesn't know it's a strike.

Unpredictability is a batter and pitcher's nightmare and I'm sure the umpire isn't comfortable with the knee-jerk reaction himself. But his job isn't in jeopardy like the man throwing the ball and especially the man attempting to hit it with someone behind him saying 'STRIKE' unexpectedly.

Should We Look at the Panda?

Should we look at the Panda? If he is in shape, why not?  The man helped us win two World Championships. We owe it to ourselves to give him another chance. The Giants would only have to pay him the league minimum. Who knows, he may only deliver the goods wearing orange and black.

He may forever have his face carved into pumpkins in the city by the bay. And that image is just scary enough to be effective. When orange is how you are identified, by the fans that root for your team, why not etch his countenance into the gourd that recognizes the departed every October 31st ?

I can still hear Jon Miller's call of his third World Series homer in the same game...'looking like the Babe himself as he rounds the bases!'

We know he made a mistake leaving us. And that it would be different for him in Beantown. But we all have to find out for ourselves how things materialize and he too needed to know how things would work out. Live and learn.

This is not a Shame on You thing. Where if they fool you once, shame on you but if they fool you twice it's shame on me. The guy was sensitive over the comments made about is expanding girth and he had to find out for himself that it was no different wherever he went. If you don't produce the hecklers will form a line to assuage their own disappointment by ridiculing your performance. But all in all the San Francisco Giant's fans loved them some Pablo. And allowing him the opportunity to tryout for them may be what get's the Giants going again.

The Span Man isn't Alone in Killing the Giants!!!

On Friday, June 16, 2017, a pop fly into shallow center field looked harmless to the Giants' broadcasters as shortstop Brandon Crawford went out to see if he could get to the falling orb. It was thought, by Giants' broadcasters, that perhaps this was the reason why center fielder Denard Span just stopped. Did Brandon call him off? That will be discovered when the question is asked. But the broadcasters, both Jon Miller and Dave Fleming agreed it was Span's ball all the way. After all, he IS the center fielder. The captain of the outfield? Not on this Giant's team.

Man, oh man, this guy is proving every day what a horrible sign he was by the Giants' management. Yesterday, at the Golden State Warriors's rally after their parade for winning their second NBA championship, it was said by GM Bob Myer that Draymond Green just wins. Denard Span just finds ways NOT TO WIN.

When you play the hard-hitting Rockies at Coors Field you do not give any team more than the allotted three outs per inning. Span either didn't see the memo or chose not to read the numerous papers attached to the bulletin board. But he is not the only player who did not read the memo. Hunter Pence is shagging some flies that are acting like some sort of repellent to the leather of his glove. Oh, those 2017 San Francisco Giants.

(The Span Man is killing the Giants. His hesitation from third base, on a wild pitch, in the June 15th game contributed to their 10-9 loss to the Rockies.) 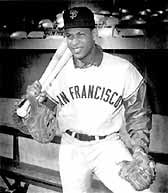